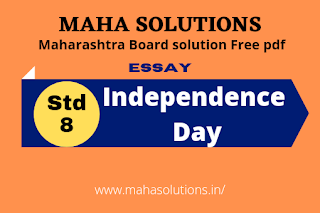 Good Morning. Welcome to the celebration of Independence Day in our school.

In this Independence Day celebration, we all should feel proud of being a part of this Independent nation that gives us the freedom to live our lives in our way. But this was not the scenario 73 years ago when India was under the rule of the British Government. The British Government ruled over India for almost 200 years, and with the continuous struggle by the Indians led by the renowned freedom fighters, India finally gained independence on 15th August 1947. For the first time, on this day, our first prime minister, Pandit Jawaharlal Nehru, raised the Indian flag on red fort. Since that time, we all are celebrating Independence Day annually. In every government organization, schools, and colleges, everyone organizes Independence day events and related cultural programs.

India was once used to known as “Sone ki Chidiya,” which means that India was full of resources. We had productive land with an ample amount of minerals and rocks. We were known to be the home for the largest spice market. The productive human workforce was one of our strengths. All these factors made the British Government capture our country and use those resources for their benefits.

With the help of the “Divide and Rule policy,” they slowly gained control over the country. The Britishers easily deceived Indians and gained control. We became slaves to the British Government, and they ruled on us for a significant amount of time.

After some time, few eminent personalities like Mahatma Gandhi, Bhagat Singh, and Jawaharlal Nehru prominently emerged as the leaders who inspired everybody about India’s scenario and how it is crucial to fight back for their rights. Many freedom struggles took place, and everybody actively participated in it. All those led to the fruitful result of free and independent nations.

Being Independent gives us many benefits like freedom of speech and freedom of fundamental rights. Without freedom, we would become a slave. We should always thank our freedom fighters, who fought for this country until their last breath, which gave us Independence.

But being India’s citizen, it is our responsibility to build our nation of pride by doing pure deeds like keeping the roads and surroundings clean, helping the poor people, maintaining the traffic rules. A responsible citizen is the one who values the nation.

Independence Day also shows the world about the courage and bravery which our country achieved. Our arm forces arrange a parade in the red fort displaying different fighting equipment to the world, portraying India as a superpower on the global platform. Different schools and Colleges organize cultural programs to celebrate this day.

Patriotism is the feeling above everything which every Indian should have. Our upcoming generation should know about the importance of patriotism and how they can be the main leading factor in building our nation. At last, I wish everyone Happy Independence Day and hope for building a beautiful nation together.

We are providing free Pdf digest for class 5th to 10th of Maharashtra Board.